Does everyone get Artengine? There is information and opportunities in each posting. Google Artengine and subscribe! Well worth it.

The City of Ottawa Public Art Program invites artists to apply to develop, design, and implement a public art commission for the Half Moon Bay Park.

Half Moon Bay Park located at Greenbank and Cambrian in Barrhaven will be the largest park in the neighbourhood primarily servicing the area south of the Jock River. A celestial theme is dominantly featured in the parks design complimented by the play structure selection and paving pattern which depicts the lunar cycle.

In accordance with the Percent for Art Policy the City of Ottawa is accepting proposals for integrated public artwork for the Half Moon Bay Park construction project. The artwork is intended to reinforce the areas’ unique sense of place and celebrate public art as practiced on the highest level of artistic creativity and imagination. Artists are required to respond to this request for proposals with a thematic or conceptual focus in keeping with the celestial theme of the park. A rendering/sketch of the proposed concept is a requirement for the first stage of this competition.

The total budget for this commission is $65,000 plus HST. The commission budget must include all costs required to design, fabricate and install the project.

Submissions must be received by mail or by hand no later than Wednesday February 29, 2012 at 3:30

An information meeting will be held at 172 Guigues Avenue, Routhier Community Centre in the first floor Lounge on Wednesday February 1, 5:30-6:30 p.m.

The City of Ottawa’s website is currently under construction. For a complete version of the Call to Artists (including eligibility, design requirements, site locations, supporting documents, and selection criteria, etc.) please email publicartprogram@ottawa.ca. Our apologies for the inconvenience. 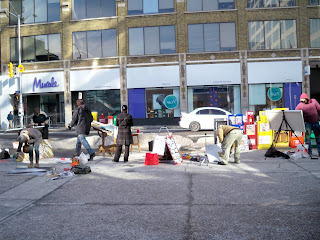 Yes, seven intrepid artists set up in the square at Laurier L'Esplanade in Ottawa, this being at a major intersection, Bank and Laurier, and we spent most of the day creating art.

While not as bitterly cold as the first time we did this, when it started to snow and the four of us were not as well dressed as what we might have been, this time, we were, for the main part, prepared. A winter thaw has graced Ottawa so the sidewalks are bare and dry, and today, the sun shone to warm our faces and paint brushes.

People following the gallery on Facebook are getting used to these flash au-plein-air paint-athons and better at responding. One evening, Patrick put out an APB and he was the only one who showed, most people having tucked away their computers for the night. But today, Patrick G, Carmella, Will, Edward, and Zander joined Patrick John and me, some of us putting in a full workday, roughly 9:00 am to mid-afternoon.

Here's a bit of a photo essay of what transpired. 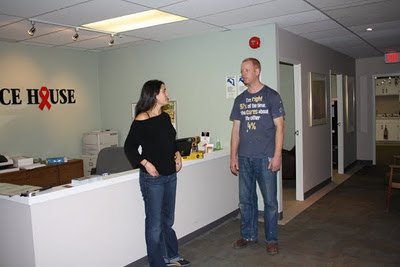 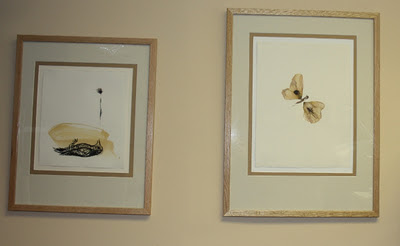 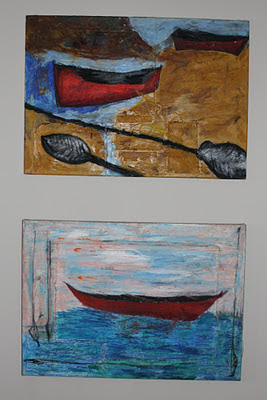 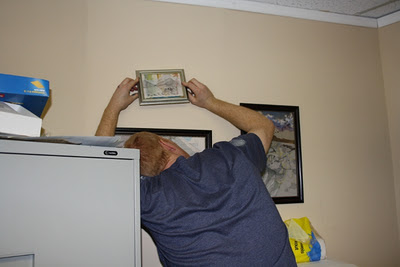 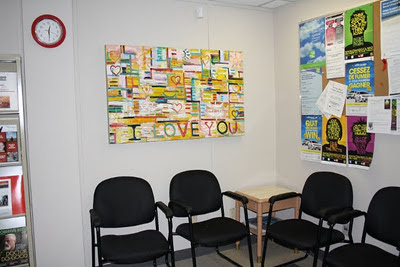 I LOVE YOU. oil on canvas. painting by Patrick John Mills. 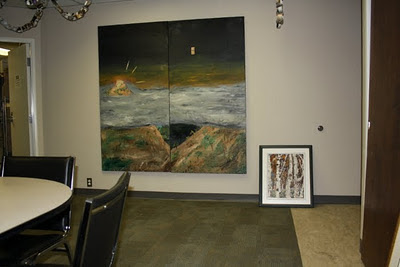 Medium size painting done by Patrick S. Greene... (will be taken to the Residence) 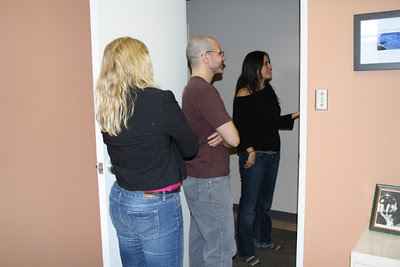 Staff and Bruce House was so excited 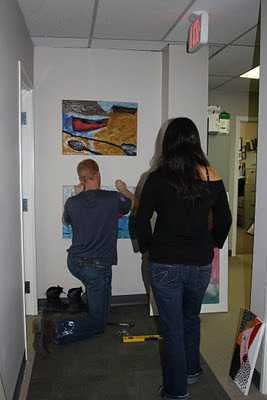 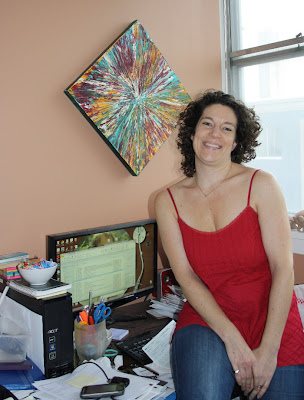 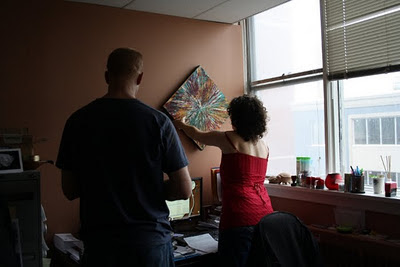 Today was a fun day. Shannon and I had the joy to feel like Santa.
This morning Shannon came over to my house / gallery. We loaded up her van with 30 plus art works and drove over to Bruce House.

Every year. For the month of December. The gallery has the Art of Giving. The gallery takes 0. Yes Zero commission of sales on sales. 100 % of all sales go directly to the artists. At the end of the month each artist is asked to donate an artwork. Some artists are very generous and give large and multiple works. Saddly some artists fail to contribute.

The Art of Giving is something I believe strongly in. December is the retail month of the year. And for the entire month of December the gallery donates everything. It is not easy to do this. But the dream is to help artists, celebrate community, and give art to wonderful people.

This year (4th year) the Charity to recieve 30 or so art works was Bruce House.

Founded in 1988, Bruce House is a community-based organization providing housing, compassionate care and support in Ottawa for people living with HIV and AIDS, based on the belief that everyone has the right to live and die with dignity.

We achieve our mandate in part through our House Program for people living with HIV/AIDS (PHAs) who require high levels of care and support and through our Independent Living Program, which provides rent-geared-to-income housing units and apartments for PHAs, along with support such as counselling, coaching and family support, as required.

We encourage you to browse through this site to discover more about our programs and services and to find out ways that you can get involved. Thank you for visiting.

when I returned home several of the staff sent me really kind emails... here is one of many.

I came home and looked at the art I have in my home a little differently tonight, as I come from a family of artists and am so fortunate to have art my Grandfather left me from his days as an artist in Saint John, New Brunswick.
I also wanted to pass along the site of my friend, Ariana Sauder, who's art has always blown me away. She is in her early twenties and so talented. http://arianasauder.carbonmade.com/
I realize there are so many artists out there, but thought she might be worth a look.
Take care, and thank you again.
Jill (from Bruce House)
Publié par Patrick John Mills No comments: Liens vers ce message

Love came and stayed at the offices of Bruce House in Ottawa this morning.  Since 1988, this community-based organization has provided supportive and compassionate housing for people with AIDS or who are HIV positive.

The front entrance, hallways and offices were decorated in shades of brown and beige, standard for admin areas, but after a battered red Caravan pulled in front of the low-rise office building and several loads of art were hoisted to the fourth floor, it was like a crazy interior decorator had pillaged the National Gallery and arrived with art for everyone.

Paintings, acrylics and oils, large, small and in between, one, a panel of two which subsequently filled the boardroom wall, all manners of expressive work were assembled on a capacious oval table while large canvases were propped against the walls.

Staff circled the room mesmerized by the plenitude of creativity dropped into their laps. They chose art for the walls of their offices, and helped choose canvases for common areas, as Patrick followed with his drill and screws. Everything went up as it was held in place, "You like it here?" Patrick asked, " Great, this is where it goes."

The works came from the December 2011 show, The Art of Giving, donated by participating artists, similar to other years when work was given to Rideauwood  Addiction and Family Services and at the Elizabeth Fry Society.

We both agreed that it was a fun-filled morning and time well-spent. Patrick summed it up,  "We build community by sharing," adding, "It feels good to give."
Publié par Shannon Lee No comments: Liens vers ce message