This month, the Patrick John Mills Gallery is featuring a group exhibit on the subject of war. For the first time in history, social networks such as Twitter, Facebook and Youtube have given populations the ability to join forces and take on suppressive government regimes with the simple click of a button. These networks allow the average citizen to share his or her firsthand account and cellphone videos with the masses; thus, making any form of government censorship or propaganda more difficult to accomplish.

On February 17, 2011, the Libyan population joined the Middle Eastern uprising and challenged their dictator, Muammar Gadhafi. Thanks to technology, their plight is not going on unnoticed. As a Canadian artist, I feel fortunate to live in a country where I can communicate my thoughts without fear of censorship or reprimand. The following paintings express my impressions of the destruction of war. 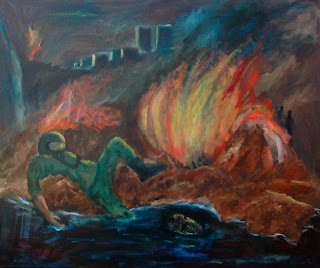 (#132 "War Zone" - Oil on canvas - 30 x 36 in.)
A Libyan woman and lawyer named Iman al-Obeidi very bravely came forward and reported that she and many others had been gang raped by Gadhafi soldiers and that this form of brutality was occurring regularly. Since then, credible networks have reported that Gaddhafi has been issuing Viagra® to his soldiers in order to destroy the Freedom Fighters by targeting what is most precious to them – their families. Reports have also stated that girls as young as eight years old have been the victims of these gang rapes. Gadhafi is using Viagra®, a medication designed to enhance sexual performance, as a chemical weapon of war with the intention of inflicting devastating physical, psychological and social pain on his adversaries. In the following painting, the Viagra® medication is repackaged. The bottles are painted a military green and are lined up in row like soldiers standing shoulder-to-shoulder at attention, ready for duty. The medication is also relabelled, “Viagra® - Chemical Weapon”. The new label describes how its effects are now exploited for the purpose of destruction. 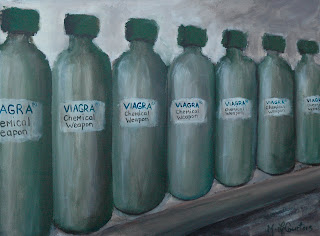 (#133 "Viagra® Chemical Weapon" - Acrylic on canvas - 20 x 24 in.)
Unfortunately, wives and children are often forgotten in reports of war because they are not at the frontline of the battle. The effect on them, however, is very real, profound and long lasting. In the following portrait, I acknowledge these unsung heroes of war and the strength of character they must require to live through such difficult times. The colours of the flag are used in the woman’s face to reveal how her focus is now on freedom. When the civil war ends, I hope the technology that has helped bring this crisis to the forefront will also help families find the resources and support they need to heal as they rebuild a nation together. 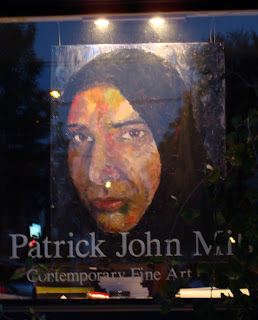 Thanks for posting Michèle. Your thoughts are so relevant. Hope to read more of your posts in the future.

These are incredible. They capture the ugliness of war beautifully. The Libyan struggle is a global one and I thank you for sharing your art.

Great work. The Viagra Chemical Weapon one actually made me a little queasy but it's very true. Thank you for sharing